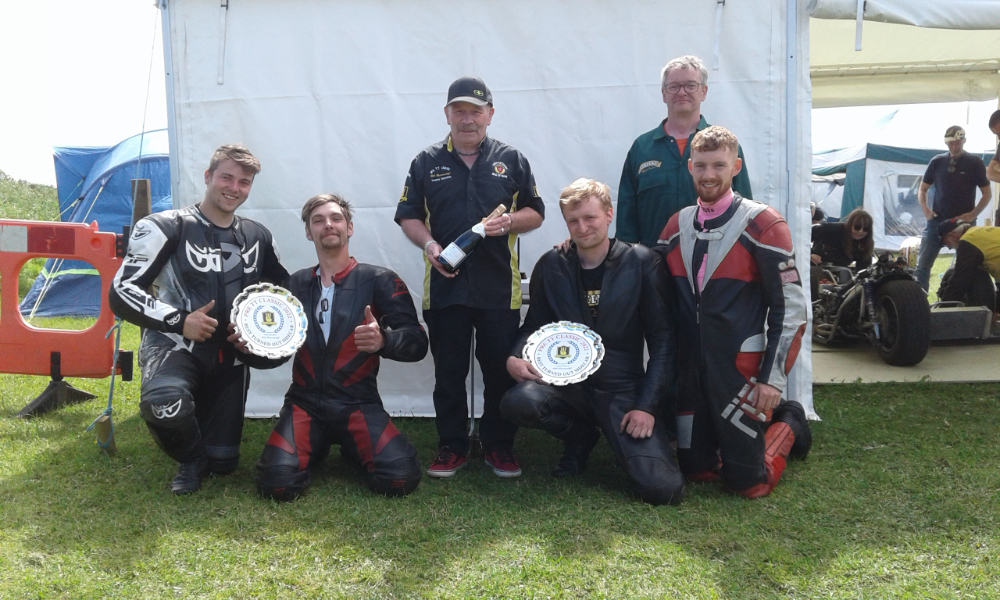 Long-time supporter of the Blackford’s Pre-TT Classic Road Races and classic bike enthusiast Bill Barrowcliff has for some years generously designed and had trophies hand made for various classes and special awards and for the return of racing on the Colas Billown Course after a two-year break, the Scunthorpe resident chose the ever-popular Sidecar Races for his award.

With twenty-one sidecar entries, Bill was destined to have a challenging task deciding the ‘best turned-out outfit.’

When it came to judging Bill after much appraisal of two sidecars, decided that their appearance could not be separated and declared equal winners.

Bill announced the Sidecar 5, a 1272cc Bellas Vincent with Danny Quirk & Dylan Weston as driver and passenger from Halifax and Leicester and Netherlands newcomers Marvin Vermeulin and Jouk Hahn with their 790 Triumph Vermeulin (56) were to share the two silver salvas and the bottle of bubbly.

In the two 3 Wheeling sponsored Sidecar races, Danny and Dylan finished second in the first and first in the second, whilst the Dutch pairing Marvin and Jouk took fourth in both races.

Southern 100 Secretary Rachel Palmer said: ‘The Club are once again overwhelmed by Bill’s kindness in donating these special silver salvas, to be presented to one of the sidecar crews at this year’s Pre-TT Classic Races.

‘Bill has been very generous to the races for nearly a decade now and his kindness is much appreciated not only by us, and everyone involved with the races, but especially those who have received Bills special awards.’