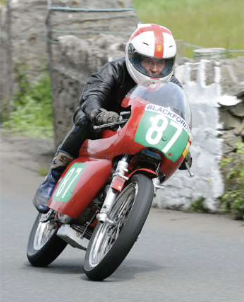 Southern 100 Racing are saddened to learn of the passing of Ted Fenwick on Sunday 24th January 2021, just two months prior to his 93rd birthday.

A man of York, Ted entered and competed in the first Pre-TT Classic Road Races in 1988 and con􏰀nued to race annually on the Billown course up to and including 2016, some 28 years in all.

1996 saw a change of machinery, to a single-cylinder 250cc Ducati, which was to prove a reliable ‘work-horse’ for the next 20-years, bringing the unassuming Yorkshireman no less than six race victories, including a hat-trick in the Single Cylinder 250cc class.

Many of his fellow riders described Ted Fenwick as ‘the gentleman of road racing’, a very fitting tribute to a reserved man, who was always pleasant, friendly and had time to chat to all.

Ted certainly left his mark on the Pre-TT Classic Road Races, which have been made all the better for his presence and he will be fondly remembered in the history of the races, not only for his results, but also for his tremendous sportsmanship.

All involved with Southern 100 Racing express their sincere condolences to his two sons, a daughter and three grandchildren and other close family members as well as friends at this sad time.