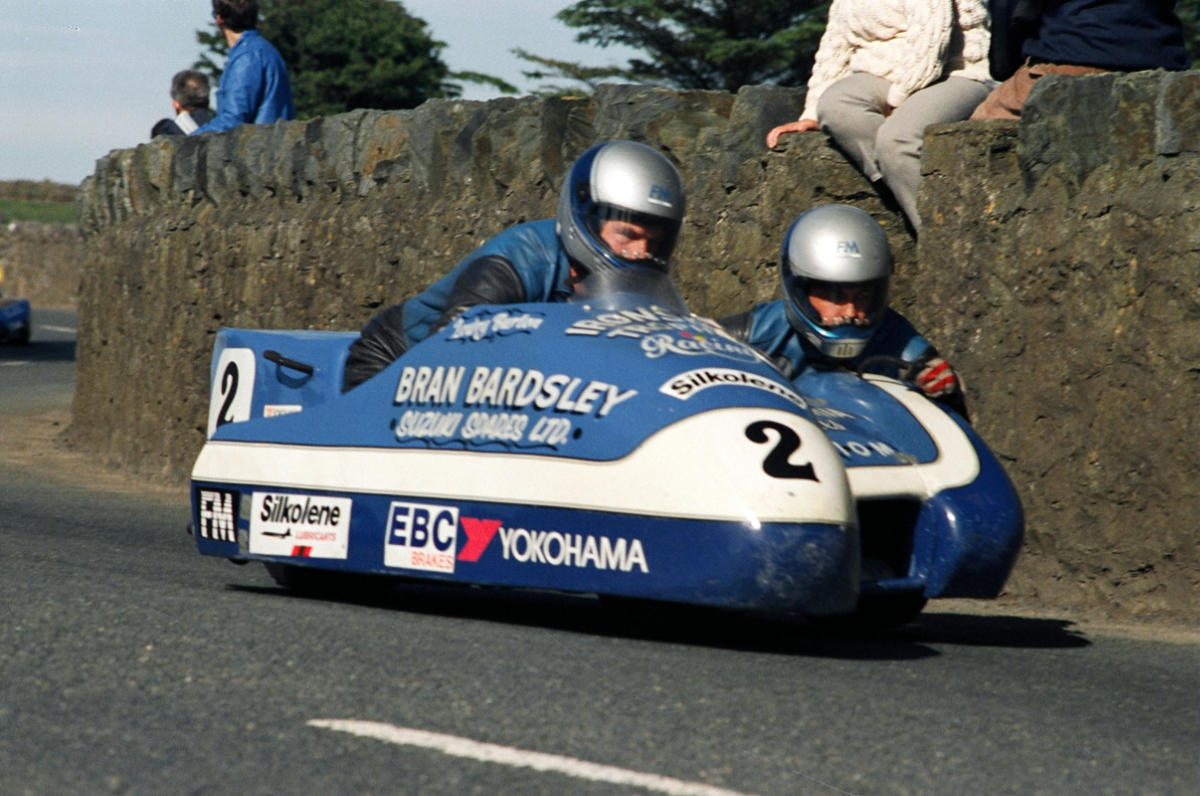 1987 saw a re-vamp of the race programme, firstly the two sidecar heats were dropped and replaced with a two leg Championship, and both over nine laps.

Double TT winners Lowry Burton and Pat Cushnahan recorded another victory on Manx soil in Wednesday evening’s first leg of the new style Southern ‘100’ Sidecar Championship. The Ulster duo led from the very early stages of the nine-lap race after local favourites Dave Molyneux and Paul Kneale retired at Ballanorris with gearbox problems on the Bregazzi Yamaha. The Manx boys had suffered gear selection difficulties on the warm up lap, but there was little they or anyone else could do as the seconds ticked away on the start line – other than cross their fingers!

Another local crew in trouble at the start were the Foxdale flyers – Artie and Edda Oates. They’d had difficulties bump starting their outfit all week, and, when the flag dropped, the popular brothers had to push the reluctant beast halfway to Ballakaighan before it eventually fired into life. They battled through the field behind another slow starting pair – Scots Gordon Shand and Johnny Shedden – to eventually take seventh spot at the flag. Up front, Burton and Cushnahan had no problems at all, and, after another midnight oil burning rebuild, the Ironside Yamaha behaved perfectly. Geoff Young and Jimmy Cochrane had a great dice in the early stages for second place with Ian Bell’s brother Geoff and Julian Tailford, until the latter went out with fuel pump problems. Rod Bellas and Geoff Knight took third some 20 seconds adrift.

On an aggregate basis, there was no way feasible that Dave Molyneux and Paul Kneale would retain their sidecar championship, after dropping out of the Wednesday evening race with a stripped sixth cog on the 750 Yamaha. But try as they did, and despite a lack of top end on the straights, the Manx pair fought well to finish the second leg less than eight seconds down on double TT winners Lowry Burton and Pat Cushnahan. Third were Geoff Bell and Julian Tailford and fourth again were local centre championship leaders Rob Corkill and Paul Magee, and this earned them a well-deserved runner up spot overall behind runaway winners, Burton and Cushnahan. Third overall were Geoff Young and Jimmy Cochrane.