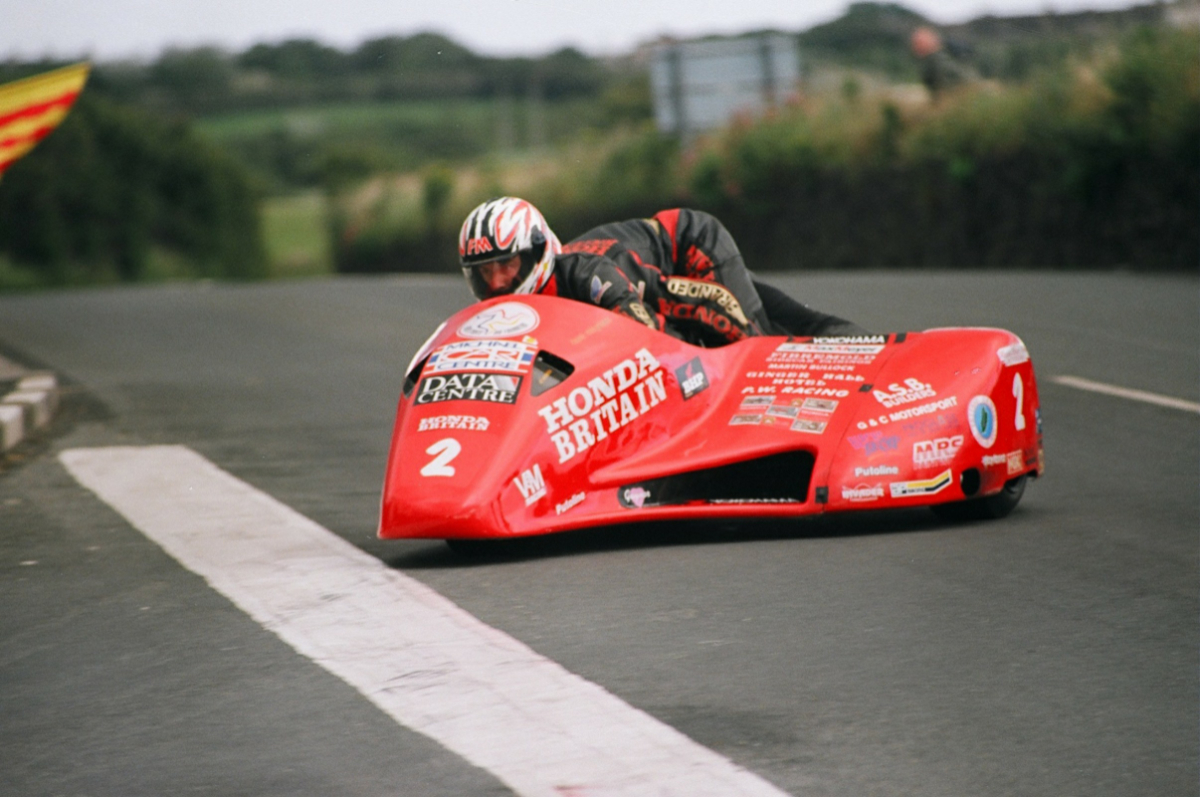 Ian Bell and Neil Carpenter were the most surprised men in the Southern 100 paddock on Wednesday evening when they came from third to first on the final lap of the first sidecar race. They had trailed race long leaders Greg Lambert/Lee Aubrey and Dave Molyneux/Craig Hallam throughout but moved into second place when Lambert and Aubrey stopped at the Black Hole.

As with the TT, Dave Molyneux returned from a year out on the world championship trail to reclaim the Southern ‘100’ Sidecar Championship title he last won, surprisingly, back in 1003 with a scintillating ride. Teaming up with Leicester’s Craig Hallam for the second time, having made their debut together at the previous weekend’s Oliver’s Mount meeting, the pair won the title at a canter after struggling with a broken brake disc in the first sidecar race. Defending champion Greg Lambert and new passenger Lee Aubrey led away from the start again, with Bell and Molyneux tucked in close behind. Molyneux shot out of Bell’s slipstream on the run down towards Great Meadow on lap one and was crawling all over the rear of Lambert down the by-pass. As it was the Sulby ace fired the Honda Britain backed machine he built himself up the inside going into Iron Gate on the second circuit, described by one of the race marshals there as the ‘pass of the week!’

Lambert and Aubrey held onto the back of the flying Honda pair for another lap, but the Yamaha chucked a rod out of the crankcase next time down the flat-out run to the Iron gate and they rolled to a halt with nothing more to show than a lap record for their week’s work. But that was soon to be taken away from them as well and within a couple of minutes of their demise Molyneux and Hallam had taken seven tenths of a second off the record they had set less than 24 hours earlier. Moly and Craig had officially been clocked at 2 minutes 37.1 seconds in practice, which is a tenth of a second inside the ultimate three-wheel record for the course set by Molyneux and Peter Hill on the GP-spec Krauser in 1995. In the race they had to settle for 2m 39.4s (95.98mph) but that was enough. Once they had lost sight of Molyneux and Hallam there was no coming back for Bell and Farrington, and whilst Ian won the solo championship title in 1987, he would have to wait another year at least to become the first man in the history to also win the Southern ‘100’ championship on three wheels. Kenny Howles and local passenger Nick Crowe very nearly repeated the TT 1-2 result when they got past Ian Bell and Neil Carpenter on the final lap, but the latter crew re-passed them at Stadium to take runners-up position at the flag by just three-tenths of a second. Roy Hanks and Robert Biggs who were locked in mortal combat with Howles and Crowe for much of the duration finished fourth, well ahead of back from injury Geoff Bell and Lee Farrington.